When we were growing up in Inda, there used to a mistaken feeling that soups were only for patients. Times have changed and we know that soups are invigorating and can be had on a stand alone basis and with a meal, irrespective of whether you are healthy or unwell.

Elsewhere in this blog, you will find recipes for:-

Today's recipe is for a soup made with health-filled ingredients: Sprouted Moong and Spinach (Palak in Hindi) . I have adapted this from Garlicky Moong Sprouts Soup with Spinach by Tarlaji Dalal , one of my favorite cookery experts.

We found this soup to be quite filling and delicious! 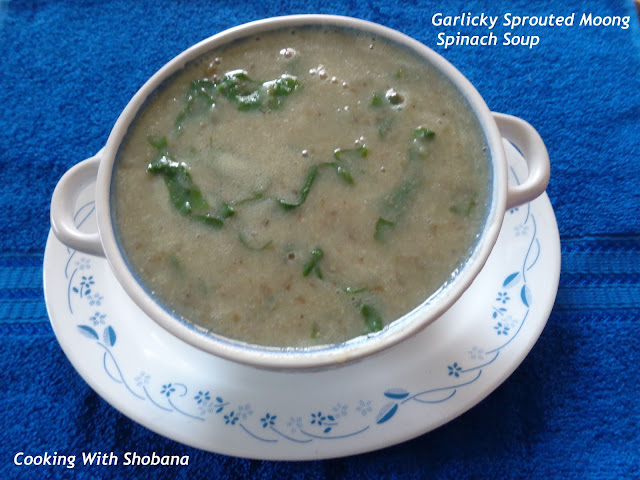 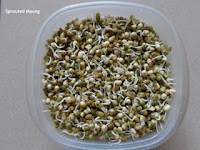 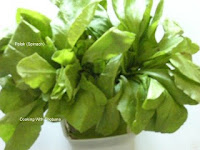 The first step is to sprout the beans. You do this by soaking moong beans overnight or for 7-8 hours. Drain the water the next day and keep the beans in a wet muslin cloth for it to germinate. Make sure this cloth remains wet as the beans germinate. On the third day, you will find that the beans have sprouted.

By way of information, usually 1 cup of moong beans should give you about 3 cups of sprouted moong. Of course, these days you do get sprouted moong in packets in supermarkets.

Wash and shred the spinach and keep aside.

In a vessel, mix together the sprouted moong and the roughly chopped garlic along with 3 cups of water. Pressure cook this for 3 whistles. Once the pressure cooker cools, remove the cooked sprouted moong-garlic mixture and blend to a coarse mixture using a hand blender.

Transfer this to a thick-bottomed pan. Add the shredded spinach, salt to taste and 1 cup of water and bring to a boil. Lower the flame and cook for about 5 minutes stirring from time to time.

The healthy Garlicky Sprouted Moong Spinach Soup is ready to be served hot.