Sri Rama Navami is an important festival in our Hindu calendar, being the birth day of Lord Rama. On this occasion, it is a tradition in Karnataka to make a few dishes in particular such as "Maavinakayi Chitranna" ( Raw Mango Rice) and "Cucumber & Dal Kosambari," a kind of salad made of fresh cucumber and moong dal.

The tradition also has it that we prepare a drink which we call "Paanak" in Konkani which originates from a Sanskrit word. This is called "Paanaka" in Kannada. Our Konkani specialty is that we include dry ginger/dry ginger powder and jaggery amongst the ingredients. This gives our paanak a very distinctive flavour and bite. 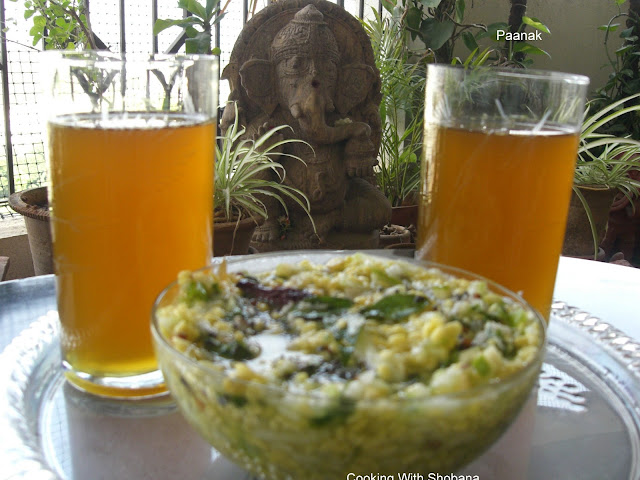 The recipe I share is the way my mother made it, which leads me to believe that this type is more popular amongst the Konkanis hailing from Kerala. I know of people who do not boil the water and jaggery, but add the jaggery, spices etc directly to water to make the paanak.

The colour of the jaggery you use determines the final colour of the paanak. It is not uncommon for people to add a dash of lime juice in this recipe, but I have not done that. You can try it as a variation.

Although the paanak I have described is usually made for Sri Rama Navami along with other traditional items, as kids we used to have this simply as a refreshing drink on a scorching hot summer's day. I remember my mother making paanak in a large vessel as there were many of us, who used to rush in from playing out in the hot sun to have some of this cold delight and ask for more.

I must add that this is not a concentrate which is served after mixing it with water. It is rather poured into glasses and served chilled.

Pour the water into a vessel
Add the grated jaggery in it, stir it
Boil the water and jaggery mixture
Take it off the flame
Add the powdered peppercorns, cardamom powder and dry ginger powder
Keep it covered for a few minutes
Once it is cooled, place in the refrigerator
Serve chilled

Email ThisBlogThis!Share to TwitterShare to FacebookShare to Pinterest
Labels: Beverages